The Wilderness Rooms were a set of eight party rooms that appeared during the Wilderness Expedition in Club Penguin Rewritten. At the time, the rooms were used as a maze puzzle, and players had to find any lurking machine parts to guide them through the maze and up to the Cliff.

If the player went the wrong way, presumably they would have arrived in the lost room, and would find a note stating that the player is lost and needs to find a route back to the start. 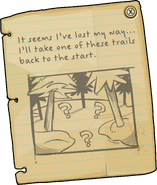 Retrieved from "https://club-penguin-rewritten.fandom.com/wiki/Wilderness_Rooms?oldid=163571"
Community content is available under CC-BY-SA unless otherwise noted.