The Water Compressor 1000 was a prototype invention by Gary the Gadget Guy. It was accidentally exploded by Klutzy, causing Herbert to awaken from hibernation.

Gary noticed one of his inventions was missing, so he called agents to look for signs of it in Ski Village. He later discovered that Klutzy had found a way into the Gadget Room (suspecting Rookie accidentally left it open), and used a spy phone to teleport the invention back to Herbert's Lair. However the invention exploded on arrival, causing the lair to fill with water, drifting Herbert into the ocean.

The aftermath of Herbert's Lair as shown in EPF Command Room due to Gary's invention. 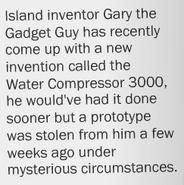 The invention mentioned in the Club Penguin Times as "a prototype."
Add a photo to this gallery
Retrieved from "https://club-penguin-rewritten.fandom.com/wiki/Water_Compressor_1000?oldid=166522"
Community content is available under CC-BY-SA unless otherwise noted.