Two divers named Fiesel and Daisy who go on an adventure to find secret treasures. A lobster and fish help them find a secret palace filled with merpenguins.

Underwater Adventure is a stage play in Club Penguin Rewritten. It first premiered on May 17, 2017.

The story follows as two divers named Fiesel and Daisy go on an adventure to find treasure and the secret underwater city of Penglantis. Along the way, a lobster named Toby the Lobster and a fish called Wise Fish assist them both by guiding them to the city. Later, they meet Bubbles and Flippers.

The play's Costume Trunk catalog.
Add a photo to this gallery 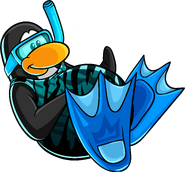 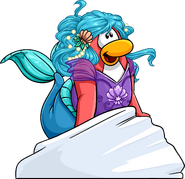 Toby the Lobster
Add a photo to this gallery
Retrieved from "https://club-penguin-rewritten.fandom.com/wiki/Underwater_Adventure?oldid=186447"
Community content is available under CC-BY-SA unless otherwise noted.