The Sunmaker 3000 is a type of heater invented by Gary the Gadget Guy. It could be seen at the Cove during the Christmas Party 2017. It was intended to bring a summer atmosphere to the Cove for players who have summer in December. Pressing the red button would give the inside an orange glow and release heat. Pressing the green button would reverse these effects. 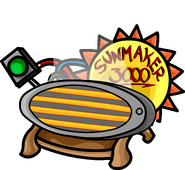 Its location at the Cove.
Add a photo to this gallery
Retrieved from "https://club-penguin-rewritten.fandom.com/wiki/Sunmaker_3000?oldid=186030"
Community content is available under CC-BY-SA unless otherwise noted.