Spin To Win is a game which was introduced at The Fair 2019. Players could use golden tickets to spin the wheel to have a chance at a variety of different rewards. 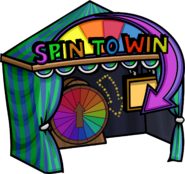 Location
Add a photo to this gallery

Retrieved from "https://club-penguin-rewritten.fandom.com/wiki/Spin_To_Win?oldid=159688"
Community content is available under CC-BY-SA unless otherwise noted.