Were you looking for the clothing?

Snow Monkey is a character in the Stage play Battle of the Ancient Shadows. In the play, he asks for the Ancient Dragon and Sage Fish to battle each other after saying that he is a fan of both of them. 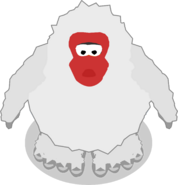