Servers provide the service of receiving and processing the inputs of players in Club Penguin Rewritten. There are multiple servers in the game and each can host a limited amount of connected players.

The initial two servers were Blizzard and Snow Avalanche. On February 19, 2017, a poll was held on Club Penguin Rewritten's Twitter account asking what the name of the next server should be.[1] Sleet won the poll between Ice Berg, White Out and Beanie. More servers were added on March 31, 2017 to handle the influx of new users as Club Penguin was closing.

The popularity of the servers have evolved over time. Blizzard has commonly been the most appreciable server populated all throughout the day. Coincidentally, Blizzard was the name of one of the most popular servers on the original Club Penguin as well.[2] When Blizzard is commonly full, Marshmallow and Sleet would also become populated.

In September 2017, the servers Avalanche, Aurora, Alpine, Arctic, and Alaska were removed as each server's capacity was increased to 500 players.

On January 28, 2020, a queue system was added which allowed players to "wait in line" when trying to enter full servers. As of February 1, 2020, it is still in testing to find out the community's reception of the system.[3] The queue system's capacity for each server was increased to 1000 players on March 15, 2020.[4]

When the Fashion Party released, every server reached 5 bars within a few minutes. There were approximately at most 3800 players online concurrently according to Candy and Lily8763cp. Players trying to enter Blizzard reported a 300-player queue,[7] and both safe chat servers Antarctic and Snow Avalanche were at 5 bars. As a result, Joee said that the Staff is considering to add more servers to accommodate the playerload.[8]

In an update on March 20, 2020, in addition to the two new permanent servers, the word "QUEUE" will now appear on servers that are full and have a queue. The queue will turn white, green, orange or red depending on how many people are in the queue.[9]

On March 24, 2020, there was a poll held in the Club Penguin Rewritten Discord Server to choose the names for two new servers. The options were Crystal, Flurry, Ice Berg, Mittens, Mammoth, and White Out.[10] Crystal and Mammoth both won the vote.

Safe chat servers use "ultimate safe chat", which removes the chat bar, meaning you can't type your own messages in a safe chat server. The servers are intended for young children whose parents don't want any risk of inappropriate messages or bullying.

Every server full in August 2017

Almost every server full except Marshmallow on August 18, 2017

All servers at 5 bars immediately after the Fashion Party launched on March 19, 2020

Red-colored Queue during Dot's first visit on March 20, 2020
Add a photo to this gallery 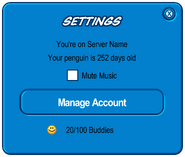 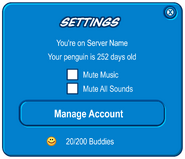 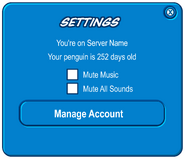 The current Settings window
Add a photo to this gallery

Retrieved from "https://club-penguin-rewritten.fandom.com/wiki/Servers?oldid=192026"
Community content is available under CC-BY-SA unless otherwise noted.