The Prototype Sled was a sled used in PSA Mission 2: G's Secret Mission. It consists of recyclable parts from around Club Penguin Rewritten. The sled was invented by Gary the Gadget Guy.

It was on display in the Gadget Room from missions 4 to 11.

In PSA Secret Mission #2, a secret agent (the player) was assigned to test the sled and then report to G to explain the results.

During the test run, the sled falls apart and you crash in The Wilderness. When you were rescued, you would report to G and tell him the sled fell apart. The sled later gets rebuilt and put on display in the Gadget Room, and had not been used since. 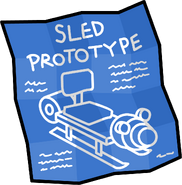 The blueprints in the Sport Shop.
Add a photo to this gallery
Retrieved from "https://club-penguin-rewritten.fandom.com/wiki/Prototype_Sled?oldid=156994"
Community content is available under CC-BY-SA unless otherwise noted.