The Party Hat was a head item in Club Penguin Rewritten. It could be obtained through Item Transfer from Club Penguin. In order to be eligible for transferring it, you had to have joined during the original Beta Test Party on Club Penguin in 2005.

It was also available for free during the Waddle On Party. However it was removed from all accounts after Club Penguin Rewritten reopened, no matter how it was obtained.[1]

The location of the item during the Waddle On Party.

As seen on the 1st Anniversary Party login screen. 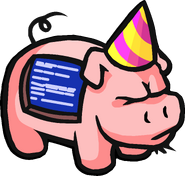 Screenhog's logo wearing the hat.
Add a photo to this gallery

Retrieved from "https://club-penguin-rewritten.fandom.com/wiki/Party_Hat?oldid=186892"
Community content is available under CC-BY-SA unless otherwise noted.