The PSA needs you for a special team mission. Can you work well with others?

Waddle Squad is the tenth and penultimate PSA mission. At the beginning of the mission, G says that the Golden Puffle was found, and you are assigned leader of a team, where you, Jet Pack Guy and Rookie must keep it safe. Rookie accidentally informs Herbert about the location of the Golden Puffle - at the Night Club - and Herbert tries to steal it. Your task, as an agent, is to prevent the Golden Puffle from being stolen.

The mission starts with G, Rookie, and Jet Pack Guy in the HQ. Gary will explain what is going on; the Golden Puffle has been discovered in the Mine. The puffle will be hidden in the Night Club and must be kept secret until the PSA can find a safe place for it. Suddenly, Hebert will appear on the I.S.E.E.U! The Binoculars 3000 from the last mission made it easy for him to see into places. He will talk about how his next plan involves Puffles, and Rookie will accidentally reveal the location of the Golden Puffle. Herbert is now on the way to steal it. The Director will then appear on a screen and state that Herbert has "taken the bait". G will explain that the Golden Puffle is actually fake, and you and the other agents must prepare a trap for Herbert. Jet Pack Guy will look out for Herbert from the sky, and Rookie will operate a magnetic trap in the Gift Shop. You are appointed as the mission leader, and will make sure everything is going as planned. The other agents will communicate with you using the Spy Phone.

Take the solar panel sticking out of the box. The first thing you should do is check with Jet Pack Guy at the Beach. He has run out of fuel for his Jet Pack. You can make emergency fuel using Hot Sauce and Cream Soda, and Jet Pack Guy already has the hot sauce. Enter the Lighthouse and pick up the barrel of cream soda. Talk to Jet Pack Guy and then give it to him. You need to divide the cream soda just right or else the engine will blow up. Click the bottle at the bottom for the solution, or figure it out on your own. When it's done, Jet Pack Guy will say that he will call you if he sees anything and fly off.

Go to the Dock and ask the green penguin for his rope. He will give it to you. Simple as that. Now check on Rookie at the Gift Shop. The Gift Shop Manager will comment that the store is having a sale, but he can not advertise it because Rookie is setting up the trap for Herbert. Take the table and the sale items and set them outside. The manager will thank you. Inside the store, Rookie is next to the Electromagnet 3000, which is leaning against the wall. It isn't working, because Rookie forgot the solar panel. Place it on the wires and you will have to play a mini game. Once it's completed, the magnet will start to work and Rookie will thank you.

In the Night Club, you need to set up the cage trap for Herbert. The cage is down. Attach the rope to the pulley and pull the lever to lift it. However, something inside the machine will smoke. Unscrew the panel with the wrench on your Spy Phone and look inside. There are a bunch of gears inside, which have all fallen out of their spots. Put them in the right spots. You'll know it's the right spot when the gear starts to spin. The trap has been lifted and is ready to catch Herbert!

Leave the room and you'll get a call from Jet Pack Guy saying that Herbert is at the Dock. Turns out it's just Klutzy holding a cardboard cutout. Klutzy will run away to the Ski Hill and jump off. Rookie will call you and say that Herbert is at the Night Club. Hurry to the Night Club and sure enough, Herbert has just taken the Golden Puffle. Drop the cage on him, and he'll lift it up and throw it to the side. G will call you and Jet Pack Guy will come in! Rookie and his magnet will burst through the wall and attract the Golden Puffle while Herbert tries to get it off. You can either shine the lights on the solar panel, or get Jet Pack Guy's jet pack and attach it to the cage. Either way, Herbert is now trapped.

G will come in with a flipchart, showing the different options the PSA has to deal with Herbert. They can either send him away on another iceberg, put him in a prison, make him do community service, or be nice and let him go. The last one was a joke. Herbert will request to make a phone call, and Rookie will allow him to do so on a Spy Phone! Herbert will teleport away, dropping a pack of seeds in the process. G will examine the seeds, and tell you when he has researched them further.

You will receive the Mission 10 Medal, and if you helped the Gift Shop Manager with the sale, the Employee of the Month Trophy. 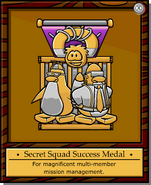 The medal players receive after beating the mission.

The trophy that players receive after completing the bonus mission.

The Map during the mission.
Add a photo to this gallery
Retrieved from "https://club-penguin-rewritten.fandom.com/wiki/PSA_Mission_10:_Waddle_Squad?oldid=191023"
Community content is available under CC-BY-SA unless otherwise noted.