The Green Cape is a neck item in Club Penguin Rewritten. It costs 200 coins in the Penguin Style catalog. 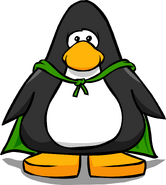 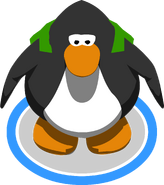 Retrieved from "https://club-penguin-rewritten.fandom.com/wiki/Green_Cape?oldid=206276"
Community content is available under CC-BY-SA unless otherwise noted.