Grand Puffy is the guardian of the Soda Seas in the game Aqua Grabber. There are two inflated pufferfish that move around him clockwise. He uses a sucking ability that will suck everything around him to his mouth (with the exception of the pufferfish near him). He then deflates, expelling the water he had previously sucked up, which creates a pushing force around him that will push your sub. This then repeats.

Sucking up the water 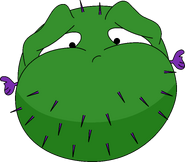 Deflated
Add a photo to this gallery
Retrieved from "https://club-penguin-rewritten.fandom.com/wiki/Grand_Puffy?oldid=192328"
Community content is available under CC-BY-SA unless otherwise noted.