Gary the Gadget Guy, also known as Gary or G, is Club Penguin Rewritten's local inventor, genius, and the former owner of the Sport Shop. He specializes in technology, math, and science.

He is known for his inventions that are used by the public daily. He has also invented gadgets that many agents of the Penguin Secret Agency and the Elite Penguin Force have used.

By meeting him, you can obtain a free background and a stamp.

He used to be shy and claustrophobic and feared penguins crowding him. Overtime, he developed confidence when in crowds. When he first appeared in-game, his shyness and claustrophobia was absent, although he had lost it on the original Club Penguin around 2013.

He is well educated and curious. He often likes to use jargon or polysyllabic words when interacting in-game. Sometimes he explains the meaning in plain English afterwards.

Role in the Spy Agencies

Relationship to the Director

Gary is not the founder/leader of the EPF, nor the PSA. This was proven because in Mission 10, The Director is seen on a TV screen and G is standing next to the TV.

Inventions for the Spy Agencies

Gary has designed nearly all PSA, and the EPF field equipment, including the PSA Spy Phone, and the EPF Phone. The I.S.E.E.U was designed to provide island-wide surveillance. Gary often creates inventions with specific uses for certain missions. Gary created inventions originally in his room at the Sport Shop, then in the Gadget Room.

Gary has been making inventions since the first day of Club Penguin Rewritten. Some of his inventions are around the island for use by normal penguins, but most were put in the Gadget Room, like the Test Chamber and the Crab Translator 3000. Gary ends most of his inventions with a number like 1000 or 3000 (mainly 3000).

It is probable that his projects receive copious funding from the PSA, and the EPF since Gary would be unable to afford all required components without some source of financial support. Many of Gary's inventions have been proven as failures, such as the Ski Lift 1000, therefore suggesting that his inventing skill is not as good as he lets on, although this may just be because the failures are always prototypes, and the final '3000' always works fine.

Gary is an ocean blue penguin, and his regular outfit consists of:

Before the Waddle On Party, he wore blue in-game.

Halloween Party 2019 Player Card.
Add a photo to this gallery

Gary's current in-game look.
Add a photo to this gallery

Gary Ancient Giveaway.
Add a photo to this gallery

Gary during a PSA Mission.

Gary after the Crab Translator 3000 explodes in PSA Mission 6: Questions for a Crab.

Gary in issue #5 of the Club Penguin Times.

Gary in issue #53 on the Club Penguin Times.

Gary wearing Aunt Arctic's glasses in issue #58 and #169 of the Club Penguin Times.
Add a photo to this gallery

Gary predicting The Great Storm of 2017 as seen in issue #31 of the Club Penguin Times.

Gary's signature in Medieval Party 2020.
Add a photo to this gallery 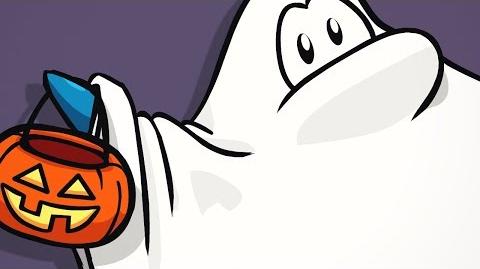 Club Penguin Rewritten Meet Gary
Add a photo to this gallery
Retrieved from "https://club-penguin-rewritten.fandom.com/wiki/Gary_the_Gadget_Guy?oldid=214314"
Community content is available under CC-BY-SA unless otherwise noted.