Funny Pig is a character in the play Secrets of the Bamboo Forest. He is a pig that assists Monkey King on a quest to find treasure. He thinks that treasure implies mud, anchovies and chocolate, all being items that a pig usually enjoys.

Their quest eventually leads them to attempt finding the Golden Feather as they need the item to cross the Magic Bridge. The Magic Bridge is said to have the said treasure on the other side. Once they find the feather and cross the Bridge, they are greeted by the Guardian Dog, who grants them access into the Phoenix Queen's palace after they show him the Golden Feather.

Throughout the play, it is shown that he enjoys food in general, including candy-topped pizza.

Funny Pig is a lime green penguin, and his regular outfit consists of: 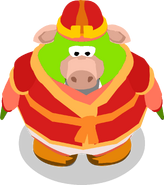