Elite Puffle for the EPF

Flare is a puffle in Club Penguin Rewritten. He is an elite black puffle that appears in the book Puffle Pal Adventures: Music Makes Magic where he and his friends decorate a Christmas tree. He has the ability to shoot fire from his mouth. He also appears in-game, when summoned by players.

Players can summon Flare at any time by holding a Puffle Whistle. He can also be summoned using the Elite Puffle button in the EPF Phone. Players can walk him just like they walk a regular puffle.

Like most black puffles, Flare has the ability to light himself on fire; however Flare can concentrate this fire and shoot it from his mouth.

Flare when a player dances.

Flare when a player sits.

Flare when a player waves. 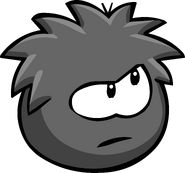 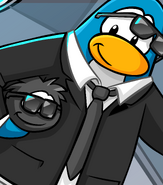 As seen on a Card-Jitsu card.
Add a photo to this gallery
Retrieved from "https://club-penguin-rewritten.fandom.com/wiki/Flare?oldid=202729"
Community content is available under CC-BY-SA unless otherwise noted.