The Earthquake Driller is a machine similar in purpose of a tunnel boring machine. It was used to excavate tunnels underground and was capable of creating large tunnels.

The driller was invented by Herbert P. Bear, and used the Clock Tower's prime gear to operate, which was stolen by Herbert. Behind the driller, there is a small wagon in which Klutzy sat with a lantern.

The Earthquake Driller caused huge earthquakes on Club Penguin Island due to the tunnels being created underground.

As a result, the Gift Shop fell into the ground where a tunnel was made. A quick thinking agent caused the Gift Shop to lift into the air and return to its normal position. Once Herbert and Klutzy got into the Boiler Room via the Earthquake Driller, an agent found them.

The driller could be seen in Herbert's base, in Operation: Hibernation, but it is unknown how it got there. The driller also had the wagon attached for Klutzy to sit on. 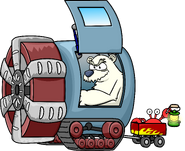 Herbert P. Bear and Klutzy in the Earthquake Driller.

Parked in the Underground Tunnels.
Add a photo to this gallery
Retrieved from "https://club-penguin-rewritten.fandom.com/wiki/Earthquake_Driller?oldid=186001"
Community content is available under CC-BY-SA unless otherwise noted.