The EPF Phone is an award in Club Penguin Rewritten. It can be earned by taking The EPF Test at the Everyday Phoning Facility. Earning it also means that you are a member of the Elite Penguin Force. It is similar to the Spy Phone, but it is for EPF Agents. 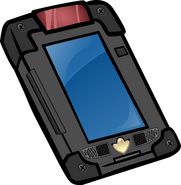 Artwork of the EPF Phone.
Add a photo to this gallery

Retrieved from "https://club-penguin-rewritten.fandom.com/wiki/EPF_Phone?oldid=150894"
Community content is available under CC-BY-SA unless otherwise noted.