Dragons are creatures in Club Penguin Rewritten. There are 3 different dragons that can be found on the island: the Ancient Dragon who is a character in the Stage play Battle of the Ancient Shadows, Scorn the Dragon King who could be found at the Mountain of Misery during the Medieval Party 2018 and the Dragon Queen who could be found in the Dragon Queen Lair in the Magic Quest during the Medieval Party 2019. 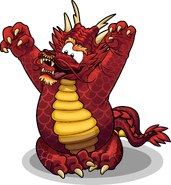 Dragon Queen
Add a photo to this gallery
Retrieved from "https://club-penguin-rewritten.fandom.com/wiki/Dragon?oldid=160900"
Community content is available under CC-BY-SA unless otherwise noted.