1 or 2 players and the Purple Puffle

Dance Contest is a single-player or two-player game in Club Penguin Rewritten. It is located in the Night Club by the poster on the wall.

The game is very similar to Dance Dance Revolution in that in both games arrow keys move upward into colored markers. The player must press an arrow key right when it's in the marker. The player can either get a perfect, great, good, almost, boo or miss depending on how accurately the player hits the arrow key.

Additionally, Purple Puffles can be included and can help the player earn extra points.

On June 22, 2018, the game was revamped to include stamps, a new track and the removal of multiplayer mode due to it being unplayable. On January 3, 2019, the multiplayer mode was added back in.

The Dance Contest, during gameplay.

The stats box that players can see after finishing a song.

The penguins in the background.

Combo Lost!
Add a photo to this gallery 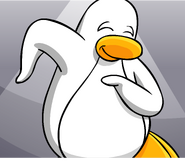 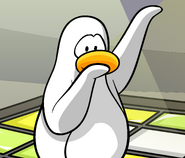 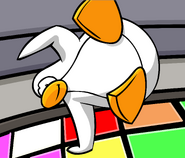 Retrieved from "https://club-penguin-rewritten.fandom.com/wiki/Dance_Contest?oldid=209145"
Community content is available under CC-BY-SA unless otherwise noted.