Cream Soda is a carbonated soft drink in Club Penguin Rewritten. It is Rockhopper's favorite drink. There are a few barrels of cream soda in the Ship Hold and inside the Lighthouse. The Cream Soda Dimension is named after, and includes lots of, this drink. Soda Seas is polluted with cream soda, and the Aqua Grabber 3000 was invented to clean the area.

Cream Soda appears as an item in two PSA Missions: Mysterious Tremors and Waddle Squad. In the former mission, it can be shaken to push up the Gift Shop while underground. In the latter mission, it is used to make emergency Jet Pack fuel for Jet Pack Guy.

A barrel of Cream Soda in Aqua Grabber. 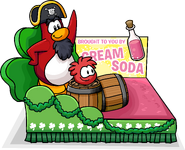 A Cream Soda float at the St. Patrick's Parade.
Add a photo to this gallery
Retrieved from "https://club-penguin-rewritten.fandom.com/wiki/Cream_Soda_(drink)?oldid=192337"
Community content is available under CC-BY-SA unless otherwise noted.