Coins are a virtual currency in Club Penguin Rewritten that can be earned by playing games and Codes. Coins can be used to buy clothes, igloos, pets and so on.

You receive 500 coins when you create a penguin. You can earn coins by playing games, mining at the Cave Mine, or using codes. Codes expire after a set amount of time so make sure to check this list often! 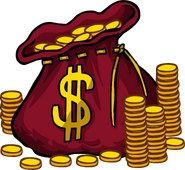 A bag of coins
Add a photo to this gallery
Retrieved from "https://club-penguin-rewritten.fandom.com/wiki/Coins?oldid=204305"
Community content is available under CC-BY-SA unless otherwise noted.