The Clock Tower is a structure at the Snow Forts which displays the current time and day in Penguin Standard Time, and a target that you can throw snowballs at. It was invented by Gary the Gadget Guy.

The clock uses Penguin Standard Time which is the main time zone used in Club Penguin Rewritten. It is designed to help penguins from all over the world to organize when they can meet up for parties and events, even if they are in different time zones.

Beside the Tower is a plaque, and if you click on it, it would show an "engraved" message about the Clock Tower.

Despite being called a "snowball-powered" clock, the target beside the clock is just an encouragement for penguins to take interest in the clock tower, as it can work properly without players throwing snowballs at it. 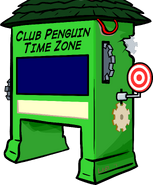 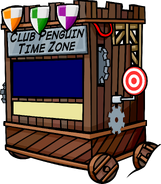 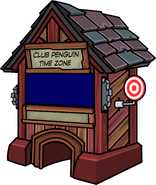 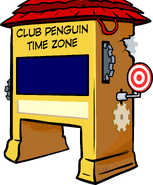 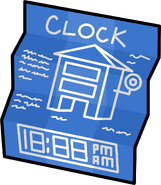 The blueprints in the Sport Shop.
Add a photo to this gallery

Retrieved from "https://club-penguin-rewritten.fandom.com/wiki/Clock_Tower?oldid=208525"
Community content is available under CC-BY-SA unless otherwise noted.