1 and the Black Puffle

Cart Surfer is a singleplayer game in Club Penguin Rewritten that can be played in the Mine.

The main objective of the game is the performance of various tricks and stunts to earn points (similar to Catchin' Waves) while riding a mine cart on a track. When players finish the game, they return to the Mine.

On January 24, 2018, the game was given a redesign with a new hardcore mode and a leaderboard added to the game.

On February 8, 2019, the font for the text in-game was changed. The hardcore mode also received its own unique music.

The goal of Cart Surfer is to earn as many points as possible in a certain amount of time by doing tricks in a mine cart. All of the different tricks give a varying amount of points, ranging from 10 points from turning and 100 points from performing a flip. Doing the same trick two or more times in a row will halve the amount of points earned and the points received will stay like that until a different trick is performed.

In Classic Mode, the player has 3 lives and the game ends when all lives are lost or when the end of the tunnel is reached. They can also bring a black puffle along, which may help you recover from a wobble. Points are lost either by not turning at a corner or surf turning or cart grinding for too long.

In Hardcore Mode, the player has only 1 life. The goal is to do as many points as possible until the player crashes, which ends the game immediately.

To perform tricks, press the connected keys to perform the specific trick. If applicable, take note that you are not supposed to press both keys simultaneously; do it one by one.

** - Based on how much time you spend doing the trick.

The game's menu screen before the revamp.
Add a photo to this gallery 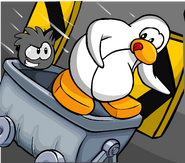 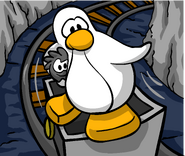 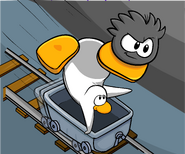 Splash art
Add a photo to this gallery

Retrieved from "https://club-penguin-rewritten.fandom.com/wiki/Cart_Surfer?oldid=203404"
Community content is available under CC-BY-SA unless otherwise noted.