This is the Beach, home of the Lighthouse.
It is a great place to relax in the sun.
Sometimes you see the pirate ship docked here!

The Beach is a coastal area in the southwest corner of the island. As it is bordered by the sea, it is a popular place to relax. Located here is the Lighthouse, which not only served as a hangout, but helped guide ships, including the Migrator, owned by Captain Rockhopper, who frequently docks here.

Like any other beach, there is not much decoration. Near the Lighthouse, there is a pile of various objects, including crates, fishing nets, and one of many buoys. There is also a small dock for ships to land. In the center of the Beach, there are beach chairs and a small bucket that can be used to make a snow castle. 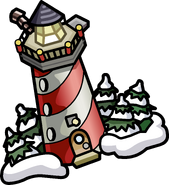 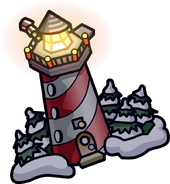 With the Migrator docked.
Add a photo to this gallery

Dig Out the Island (phase 1)

Christmas Party 2017 construction and Dig Out the Island (phase 2)

Christmas Party 2017
Add a photo to this gallery

Holiday Party 2019
Add a photo to this gallery

As seen in PSA Missions

Retrieved from "https://club-penguin-rewritten.fandom.com/wiki/Beach?oldid=211645"
Community content is available under CC-BY-SA unless otherwise noted.