Not to be confused with the Aqua Grabber game.

The Aqua Grabber 3000 is a submarine which can be only be operated by one penguin. It is known for being used in the Aqua Grabber game to find and collect treasure.

It is the successor to the Sub 1000 which was a previous design prototype for the machine. It can be seen in the Gadget Room while playing PSA Missions. 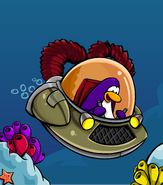 As a power card in Card-Jitsu.

The destroyed Aqua Grabber 3000 at the Hidden Lake.

To the right of the Iceberg which allows you to access the game.
Add a photo to this gallery

Retrieved from "https://club-penguin-rewritten.fandom.com/wiki/Aqua_Grabber_3000?oldid=192335"
Community content is available under CC-BY-SA unless otherwise noted.