Ancient Dragon is a character in the Stage play Battle of the Ancient Shadows.

Ancient Dragon and Sage Fish were recalling of the old shadow fight between their respective camps when Snow Monkey makes his appearance. After a nice compliment about these two protagonists, he asks for another shadow fight. 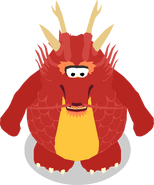