Not to be confused with the server of the same name.

Alaska is a main character in the Stage play Quest for the Golden Puffle. She is a brave explorer who can be careless while on an adventure. She goes on her quest with Yukon, who is more reluctant to rush into danger.

Alaska is a peach penguin, and her regular outfit consists of: 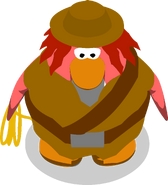