The 2019 Club Penguin Earthquake occurred on July 24, 2019 during the construction of the Medieval Party 2019. Various aftershocks could be felt island-wide every 30 minutes or so (after the initial quake at 1:05 PM PST), which would initiate the emergency lights at the Town, that when fired up, an emergency siren would play.

Gary went to investigate and alarm the public about the earthquake. According to a book he found, the dragon queen would make an earthquake happen before her appearance is known. She would make a "surprise attack" to show how powerful she is. Gary suggested this may be related to the source of the earthquake.[1]

The tremors ended August 4, 2019, when the Medieval Party began.

On July 26, 2019, cracks formed at the Boiler Room. The boiler and its connected pipes broke causing leaks, and the light started flickering. A large warning sign was added. 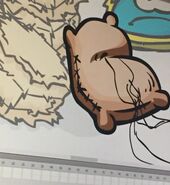 Article in issue #116 of the Club Penguin Times.
Add a photo to this gallery

Homepage.
Add a photo to this gallery

Retrieved from "https://club-penguin-rewritten.fandom.com/wiki/2019_Club_Penguin_Earthquake?oldid=186606"
Community content is available under CC-BY-SA unless otherwise noted.